On June 25th, my House of Shine friends and I went on our annual Serentripity where we ended up in Granbury, Texas and ultimately Dublin, Texas. While in Granbury we passed by Babes and saw this: 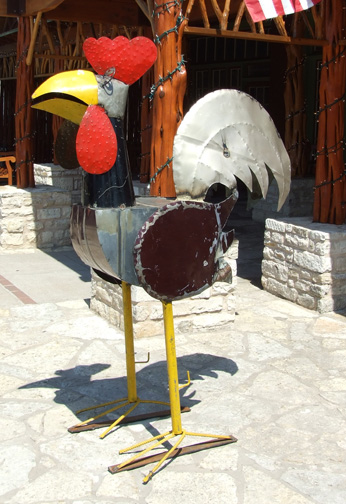 At the time I thought, "I want one of these." But I didn't pursue it too much until in mid-July I read this:


http://thebloggess.com/2011/06/and-thats-why-you-should-learn-to-pick-your-battles/
After giggling through that story at my desk by myself and then laughing hysterically with Chris as I read it to him that I night, I knew I had to have my very own five foot metal chicken. And wouldn't it be fun to have for the pool party I was having that same weekend. I wouldn't rest until I had it.
Finding the five foot metal chicken consumed me and proved to be a more difficult task than one would imagine. You would think that you could just Google it and find it like you do everything else but no! Nada. I was coming up empty handed. I was emailing work friends. I was calling Mexican import stores. Friends were emailing other friends to see where I could buy a five foot metal chicken. Friends in south Texas were taunting me with "those are everywhere down here!" Even my own sister- "I saw those at the Mercado in San Antonio." Well, la-dee-da! I'm in Dallas!
Surely! Surely there is some store, some flea market, some place that sold five foot metal chickens to crazy people. I found a couple of places that did sell them but they were out of stock at the moment. I spoke with a guy in Frisco and he said he thought they were $350 but to call back later to talk to Kevin, the owner. Here is that conversation:
July 14, 2011 4:45pm  ringing up Lone Star Trading Company:
Me- Is Kevin Available.
Guy- He's on the phone with a customer right now. Maybe I can help you.
Me- Well, it's just the Crazy Chicken Lady.
Guy- Crazy Chicken Lady or Chicken Legs?
Me- Lady! Crazy Chicken Lady! I called earlier about your metal chickens.
Guy- Oh yeah. I talked to you earlier. Hang on. Let me see if I can get him to tell me how much those are.
Me- Okay. Remember, I'm looking for a five foot chicken.
Guy- Okay, Crazy Chicken Lady. Hold on.

For a long time.

Guy- Okay, Crazy Chicken Lady. The five foot ones are $350 but did you say you were in the area?
Me- Yeah, I'll come pick my chicken up. (gulp at price) Do you have one there?
Guy- No, the owner has to go pick them up but if you come pick it up in the store it's half off.
Me- Consider that chicken sold! It's mine. When is he going to go pick my chicken up?
Guy- Well, he's not going until about 2 weeks.
Me- TWO WEEKS! Are you kidding me? That's so long away! And how long does it take to go get it? A day? A week? You don't understand. I'm driving all my friends crazy about this chicken. Tell him he has to go get it! Tell him to leave today!
Guy- (laughs) - You are a crazy chicken lady. (laughs some more) He usually leaves early in the week and gets back about Thursday and then we have to unload and all that.
Me- But you can take my name and when my chicken gets there you'll call me? You'll call me right away? SO, my chicken will be there in about 3 weeks?
Guy- Yeah, yeah. I'll call you. He's going to go in about 2 or 3 weeks.
Me- Wait, which is it? 2 or 3? Don't push it back now?
Guy- (laughs)
Me- Never mind. Okay take my number and call me as soon as my chicken gets there. And tell him to hurry because I'm going to keep looking.
Guy- Okay, that's Crazy Chicken Lady... what's your number.
I give him my number.
Me- What's your name?
Guy- Crazy Cow Man. (laughs) Nah, they actually call me Damn it, Donny. Everyone's always mad at me.
Me- Well, Damn it Donny! Get me my chicken!
Guy- Bye Crazy Chicken Lady.

I updated my friends via email. Subject line: The Chicken Saga. And then it was a ton of cock jokes. I commented on Facebook "I just gotta have that chicken!" We were scheming how to steal the one from Babes in Granbury. And laughed when a friend was going to dinner with the Babe's co-owner. I was laughing so hard on that Thursday that I had a natural high.
I had to ban myself from talking about chickens before I got fired.
And, yes. I know. It's a rooster. But chicken sounds funnier. Doesn't it? It does! It's just funnier. Deal with it.
Then on August 1st, I got a call from Durango Trading and they had two chickens in! But she didn't know the price yet. That's two beautiful chickens! 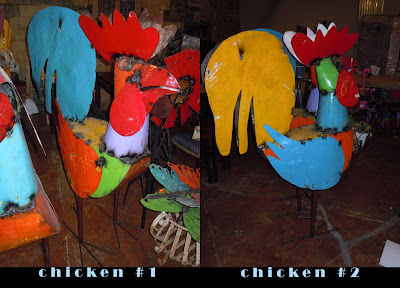 How could I choose? They are both so wonderful. Oh my God. Was I actually considering purchasing not one five metal chicken, but two? How fun would that be?! They could be talking to each other across the pool. I could move them around to different locations. I could name them something really cool like Heckle and Jeckle or Ben and Jerry or Hank and Willie.

I thought, "Oh well, Damn it Donny. Sorry bout ya."

But then he called, too! I could just see it. A metal chicken bidding war! Except Durango Trading wouldn't negotiate the price for me so I wound up going with the cheaper chicken that Damn it Donny had and I put the whole having twin five foot metal chickens thought out of mind. Though right now it would be fun to have another one.

I drove up to Frisco on Saturday, August 6th and saw him right away. I wandered in looking for someone that worked there and first met Kevin. He asked if he could help me and I told him, "That's my chicken." 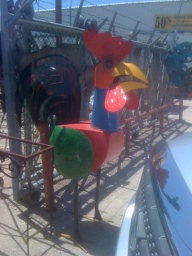 He said, "You're the Crazy Chicken Lady?"

Guilty. Here's the tag they put on my chicken. 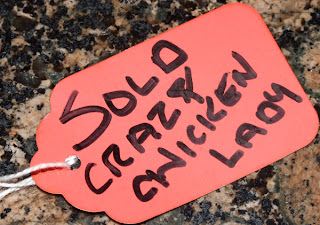 They loaded him into my car and Damn it Donny wrote my ticket up and I was so happy to finally have my five foot metal chicken, Norman and I sang Happy Birthday to me. He's a very good singer.

He was too big for me to unload by myself so he wound up in the back of my car and let me tell you, he was none too happy about it. He was swearing up a storm. He got it from Beyonce. He kept saying, "I've fallen and I can't get up." He kept threatening to call the ASPCA but he didn't have a cell phone so I wasn't too worried. 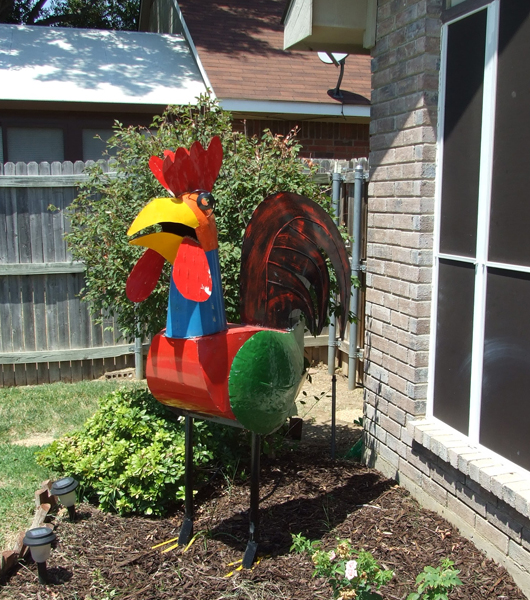 Isn't he great? Best birthday present I ever bought myself.
Posted by Cheryl Houston at 6:00 AM

You have a great way of recapping a story and making your reader feel a part of it!

Congratulations on your chicken! And what an odd sentence that is!

Cheryl, check out today's post on EPBOT: you'll see what I mean at the second-to-last paragraph. http://www.epbot.com/2011/08/ill-buy-that-for-4.html

Hey, in my book, EVERYONE should have a five foot metal chicken!

Cheryl, tell that to my boyfriend. He told me I cannot have a 5 foot chicken. Although I couldn't find one in southern California if I tried. And I have. Great story. Loved it.

Hmm... now that I'm not searching for one, I see them everywhere!! Hey BOYFRIEND!!! Let her have a 5' metal chicken. They're awesome!

I have those too!

Cheryl Houston
I'm a simple girl who was born and raised in a small South Texas town. I never had big goals or dreams. I believe in love, the kindness of others and the beauty of art.